Fractals are typically composed of "self-recurring" patterns which can be seen from the microscopic through the full-scale version of the object.  A new generation of computer applications is allowing artists to focus this phenomenon into visual and 3D works in an amazing confluence of art and technology.

What is a Fractal?
Benoit Mandelbrot, mathematician and IBM researcher, coined the term 'fractal' in 1975 to describe a form of geometry that focuses on broken (fractured) and repetitive or derivative shapes.  Any number of definitions can be found for the term fractal, as well as assorted descriptions of fractals themselves, and they range from the very general to the very technical, from the mathematical to the artistic.  Fractals are often described as being typically comprised of 'self-similar' patterns, merging or morphing into related or identical ones, that are then recurring.  Scale is important in that fractals are usually described as possessing like elements regardless of perspective, micro or macro, infinitesimal to infinite!  Fractals are found throughout the natural world - snowflakes and frost, certain flowers and sea shells, mountains and other geologic and galactic formations.  Think also of kaleidoscope images, or those seen through an electron microscope.

Symmetry and balance in design are essential elements of fractals.  As detailed patterns of self-repetition, fractals have been perceived mathematically since at least the 17th century,  In the last several decades fractals have received increasing attention due to their aesthetic qualities and intrinsic artistry.  Fractals have been described as a paradox immeasurably complex, but amazingly simple, highly geometric, yet elegantly beautiful.  In our modern age, with the assistance of sophisticated technology, a new breed of artist is exploring the fractal terrain.  This emerging art form may be aptly compared to photography in the mid-1820's - a promising confluence of art and science.  Expect ever more beautiful imagery to be revealed as this phenomena evolves. 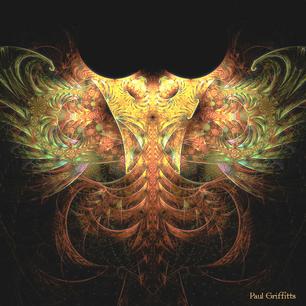